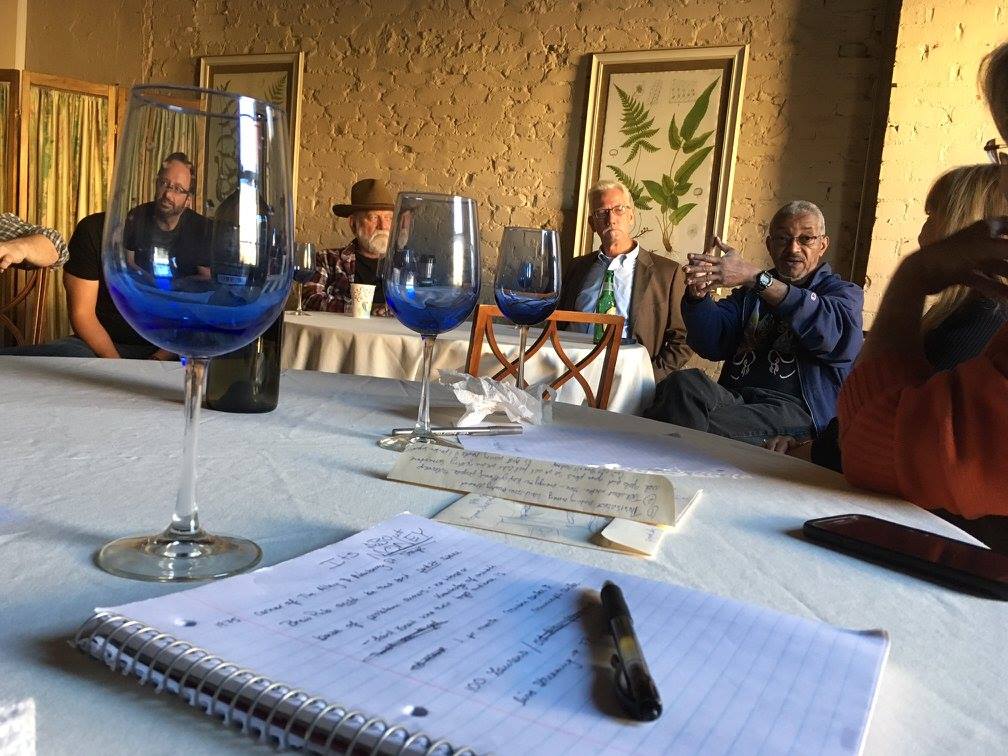 Posted at 22:15h in #Aiken4Music, Meet and Greets by Emma Platte
0 Likes

On Monday, December 5th, we had our second Musician’s meeting upstairs in the Collaboration Room on 318 Park. Although not everyone from the first meeting was able to attend, some newcomers came, making this meeting bigger than the previous one. And as for the all-important element of food, this time Dana Rideout treated us with homemade cookies and peanut butter fudge. Yum!
Since we did have many newcomers, Katy gave a quick, abbreviated replay of the mission of One Aiken- open collaborations, and more specifically that of Aiken4Music. She accompanied this with a hand-out about One Aiken with a contact information/sign-up sheet for membership and closed Facebook groups. We then went around with names. This revealed the depth and breadth of the individual talent and experiences, from former recording artists in NYC, to small town singers and music recording studios, to huge music fans who just want to be able to hear music without traveling or spending the night in a hotel, the room was charged with synergy. We also received the exciting news that in between our meetings, John Howard of The Vintage Music store agreed to be one of the leaders and coordinators of the Aiken4Music group. John is in charge of the annual GABBA Fest in Makin, GA and has lots of experience in the music world.

One of the first things said in the meeting was that “the music in Aiken has incredible talent and depth. But right now there is no venue.” Jerry asked for a definition of “music scene,” citing the different types of music played in Aiken. It was agreed that the goal is for all artists to be able to make money and to play on a regular basis. One specific idea was to capitalize on the annual Julliard events, by having local classical music events around the area that week to help build up the excitement. Another was to get a list of all the different bands with their individual types and styles and make up one or more big music festival(s) with different ‘flavors’ of music in different areas.

It is an acknowledged fact that musicians are not an inherently business-oriented bunch. They are passionate about their music, but not so interested in the promotion and negotiating thereof. To help remedy this, Bobbie Whalen proposed the idea of eventually having some sort of business manager that would help be a liaison between restaurants/venues that wanted good music and musicians that wanted to find venues. It would also be a good starting point for beginners in the music industry and for uncertain venue owners wanting to find good music. Eventually, the hope would be that the best bands would branch out for themselves, but it would help the new ones find a niche and get a chance to play. That was deemed a good idea to be further explored, but as Slayton of The Ands said, “we can also do a lot for ourselves by thinking outside of the box. Let’s not just match a band with a certain venue- expand!” Currently, there is momentum for a Busker’s Weekend downtown on the third weekend of each month. One member is working on getting the regulations for Busking on the streets and in the Alley.

Once again, the hardest part of creating a music scene in Aiken is getting the community excited about it and spreading the word. Collaborating with Beth Brodie in her “The Aiken Scene” Facebook page is a good option.  Jerry cautioned that on Facebook it does not matter how many like your page has if you do not commit to regular updates, a basic algorithm limits your audience. The importance of self-promotion was mentioned.  John Howard brought up as an example that some musicians play every Saturday at the same place and location, but no one knows about it. Self-advertisement is key!

One way to spread the word was to make a master collaborative email list. Instead of everyone being protective of their own personal little lists, One Aiken will take everyone’s contacts and make a master email newsletter, with notices for all the different events. Perhaps, we’ll even offer different options for the different genres. This plan will benefit everyone, with a larger audience receiving the message and also offering a chance to try out different kinds of music to people who otherwise wouldn’t know of or look into those opportunities. It would also be guaranteed to reach people- regardless of frequency- and would have not extra costs for printing and mailing copies. That said, it would also be important to have a print newsletter/schedule flier for out-of-towners and quick reference in locations around the city. In all these ventures, however, it is crucial for the bands and artists to put forth an effort to promote themselves as well. One Aiken can’t do it all for them!

It was at this point that one of the members asked Josh what he thinks of when he hears ‘hottest music town in South Carolina.” Josh was a guest musician of The Ands that week and is a musician who looks up music when he travels. The conversation took a sudden upswing as the picture painted by his words fired the assembly. In Josh’s words, the hottest music town in the South would have buskers on the streets playing every night, as well as the live music indoors. Regularity and consistency. An impassioned community of people eager to share their music and to welcome others in. A safe and concentrated environment that eliminates having small pockets of music with big spaces in between. Students will look at our Universities because they know that we have a ‘cool’ environment to be in. Excitement swept the room as the image of the completed goal took hold. Up to this point, the purpose of the group mission had not yet been defined. Doing so gave definite purpose and meaning to the meeting and helped to identify the steps that will be taken.

At this point, Slayton of The Ands burst out, “It won’t happen overnight, but we are so much closer than we think. All the basic groundwork is already here. “ A round of assenting nods circled the room. Slayton then told us that within six months of his return to Aiken, he found 20 times the number of musician 20 times the caliber of what he found in the five years he lived in Charleston.

We are closer to creating the next hottest music town in South Carolina- no, in the South- than we think. Based on the passion and energy found just in that one gathering of just a fraction of Aiken’s Musicians, none of even the wildest hopes for the new Aiken scene are impossible. All that we need to do is to harness that synergy and GO!

The #Aiken4Music group’s next meeting will be at the Aiken Brewery Pub with the owners of various venues. Next, we will have a World Café Meeting, tentatively placed at the Newberry Hall. Our meeting topics will largely depend on the activity of our closed Facebook page, to which all interested are welcome to ask to join. RSVP, get updates, and more under our #Aiken4Music Organization tab.