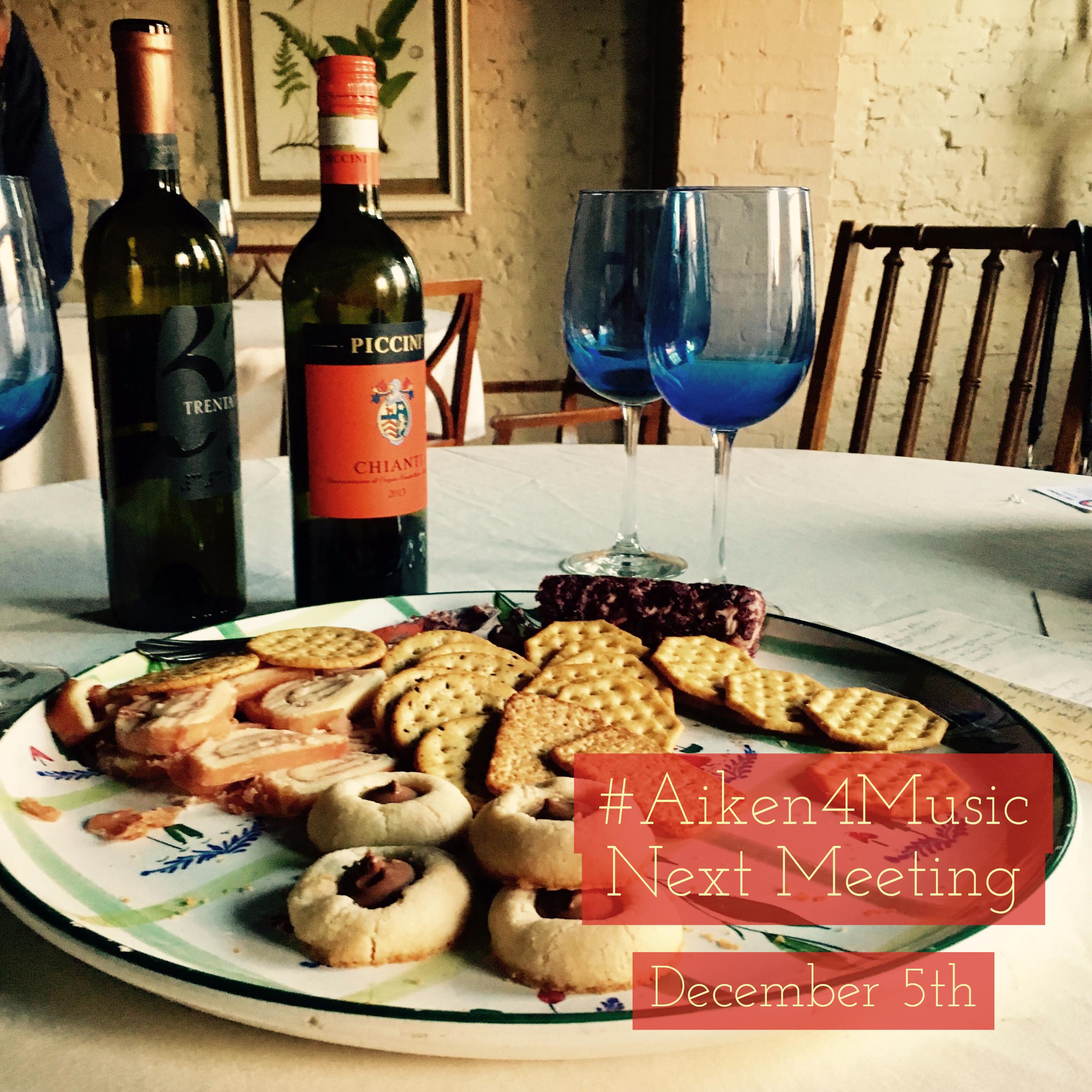 Posted at 19:48h in #Aiken4Music, Meet and Greets by Katy Lipscomb
1 Like

Last Sunday, November 20, members of the #Aiken4Music group had their first meet ’n greet up in the Collaboration Room. Earlier in the day, Katy wrote on the event page on Facebook to announce that she was making cookies and bringing wine.

Katy opened up the floor with recapping why One Aiken – open collaborations was started- it’s all about MONEY, people. (And yes, ‘money’ is meant to be all caps. That how she said it!) In order for everyone to make money, a new ‘music culture’ needs to be formed in Aiken. Who’s better at doing that than the folks with a burning passion for music and who have made it their life’s goal?

At first, the different band members just shared their stories and hopes with each other. The lack of availability of venues and the lack of value with which music is perceived was mentioned. One man remarked that he was paid the same now as he was back in 1979. Many businesses that formerly offered live music are no longer interested, or have changed owners. Although many restaurants and bars many still want music, there is a lack of a suitable venue for real shows. The Aiken Center for the Arts ranges from $650-$1375 for six hours (and that’s only for the space. Nothing else included.) and other places aren’t available, similarly expensive, or only rent by the month (here’s looking at you, 100 Laurens.)

It was agreed that the venues themselves and their owners needed to step up their game in advertising when a band is playing if they want the live music to have its full business potential. Unfortunately, many businesses go for the cheapest talent, resulting in bad music and monotony that loses customers at the get-go. Or, the owners may quit after a so-so first night, not willing to keep trying out the live music to establish a pattern of new customers brought by the band.

This wasn’t all just a whine festival, though. The group expressed a desire to help the venue owners to find the right “sound” for their desired clientele and even possibly helping with the initial ASCAP licensing fees with fundraising concerts if the owners want them to do covers. On the other hand, though, Brooke Lundy brought up the fact that if someone is willing to play for free, the rest of the musicians also get hurt. A round of assenting nods swept the room as the others took in that point.

The artists also brainstormed how to advertise and spread awareness themselves. At this point, if someone wants to listen to live music in Aiken, it’s a hit or miss affair. The best option is word-of-mouth (a weak support) or to simply wander the streets in hopes of something you’ll like. Having a group Facebook page, a little (to begin with) newsletter/magazine with listings of bookings and band spotlight articles, similar blog articles, a YouTube channel, Facebook Live, and a column in the newspaper were all discussed. Effectively using these different forms of media will help to create an appreciation for the hard work and skill used in the music industry, to educate on individual bands, music styles, and music history, and also to create a demand for more live music. Actually, Nolan, a member of The Ands, was so excited about the idea of a newsletter that the guys in the band immediately adjourned for a powwow right after we broke up. Within twenty minutes, they all came back to Katy with rough ideas for the first newsletter! That’s raw energy that’s up and rarin’ to go!

At about this point, the group began to loosen up. The wine went around again, more cookies were grabbed, and little side conversations and jokes began to circulate. The mood swelled with camaraderie and the conversation became more nostalgic, like a grandfather recounting ‘the good old days.’ Philip Albenisius spoke of the open-air stage at the corner of The Alley and Newberry St. back in 1975.  Live bands would play at the Brewery Pub upstairs, in what was described as ‘the perfect venue.’ The group spoke of the different attractions of doing a show and of just being background music. “It’s fun to see everyone just having a good time and enjoying themselves. You don’t need to be the center of attention all the time as a musician.” The Playhouse Coffee House Series was praised as having been a perfect setting with an artsy feel, where the artists were both listened to and in the background. Hopefully, that venue will be open again for other events.

The conversation then took a more practical turn, with solid plans forming. The idea of a cover change at venues took hold. Even $1 or $2 would add value. As John Howard said, “anybody we want there can dig that out from the car seats and we’ll post one of our guys at the door with a stamp.” We need to set up a closed Facebook group in order to coordinate efforts. That way, everyone can publicly ‘call’ different jobs so that all bases get covered and no energy is wasted. One guy offered to talk to some friends and people in other towns that have a strong music scene, like in Greenville, SC or Athens, GA. Synergy is the best way to succeed. The question “what does success look like?” came up, eliciting a call to think it over. We will establish specific and targeted short term and long-term goals, together with action steps, at the next meeting.

One favorite idea was to have a monthly- to begin with- music night at the Municipal Building and have beers and snacks available. The most enthusiasm, however, was generated when the concept of a Bar Crawl was suggested. Participants could buy their tickets beforehand or at a specified location the night of. Different bars and restaurants would participate with drink and food specials to the passport-wielding customers. Each location would have live music and the ticket proceeds, as well as possible cover charges, would go to the bands.

The next meeting will be on Monday, December 5 at 5:00-6:30 pm, in the Collaboration Room again. Then, we’ll have a third meeting at one of the venues- most likely The Aiken Brewery- to meet with the owners, show solidarity as a unified group, and to buy their drinks (a key business move!)The date is as of yet undecided. All who are interested are welcome to become members of OneAiken and to attend, the only prerequisites being energy, passion and willingness to ‘put some skin in the game’ as Katy puts it.

We talked about so much more- if I tried to recap it all this would be unbearably long! It was such a terrific surprise that the meet ’n greet turned into first a real meeting, then a solid work session with a fun, collaborative feel. Judging by the after-talk and contact info/advice swapping, we all went away having made invaluable connections and tremendous steps toward making Aiken the greatest small-town music scene in the South!  Come RSVP to the next meet and greet on December 5 from 5:00 – 6:30 by clicking here.